On September 27, pharmaceutical companies Eisai and Biogen released a statement describing results from an experimental drug, lecanemab, that showed a potential reduction of clinical decline in a study of people with early Alzheimer’s disease.

In the Clarity AD phase 3 clinical trial study, the drug slowed cognitive decline by 27 percent over 18 months. The study included 1,795 people with Alzheimer’s disease, including approximately 25 percent Latino and African American participants. About a fifth of participants experienced amyloid-related imaging abnormality (ARIA) side effects such as brain swelling or small areas of bleeding. Less than 4 percent of these participants had symptoms related to these effects, meaning the ARIA was detected on an MRI scan, but the individual did not experience symptoms from it.

The drug has not been approved by the U.S. Food & Drug Administration (FDA) and has not met the criteria required to be submitted for approval to the FDA. More details about the study and lecanemab will be presented at the Clinical Trials in Alzheimer’s Disease (CTAD) meeting November 29, 2022.

“This is very exciting news for the field and for the millions of people affected by Alzheimer’s disease,” she said. “The study had promising results, a good safety profile and good representation of study participants.”

Carlsson noted the study needs to be published in a peer-reviewed journal, presented to peers and debated and analyzed, and the medication’s potentially significant side effects and costs must be reviewed and considered.

“I look forward to seeing further information and to hearing more about lecanemab in a journal and at CTAD,” she said. “All of us across our Alzheimer’s disease programs are looking forward to more analysis and more information about the safety and efficacy of this potential treatment.”

Nathaniel Chin, MD, medical director and clinical core co-leader of the Wisconsin ADRC, noted that even if further analysis of lecanemab shows the Clarity AD study results are accurate, the drug’s potential utility is limited.

“It’s important for the public to know that even if this drug is truly effective, it is still only slowing decline,” he said. “People in this study continued to decline, but they did do so at a slower rate. It’s critical that research continues to look for treatments that will stabilize the disease and ideally, prevent it from happening.”

Research participants at the Wisconsin ADRC and WAI have contributed significantly to helping scientists understand how the presence and build-up of proteins in the brain contribute to Alzheimer’s disease. An abnormal protein in the brain, beta-amyloid, is a hallmark finding in Alzheimer’s disease. The drug lecanemab is a human monoclonal antibody that targets this beta-amyloid build-up.

A study at UW–Madison is tracking how the same potential monoclonal antibody could target amyloid build-up in asymptomatic people, with participants as young as 55 currently enrolled.

UW–Madison is one of 100 research sites in the world currently offering a clinical study of investigational treatment lecanemab in people who may be at risk for memory problems. The study is aimed at delaying memory decline in people up to 20 years before the symptoms of Alzheimer’s disease appear.

The AHEAD Study tests whether intervening with lecanemab, the same drug used in Clarity AD, may prevent future memory loss and dementia. It is the first research study that aims to help prevent Alzheimer’s disease by enrolling participants as young as 55 and using a tailored dosing approach rather than a one-size-fits-all approach.

“I am sure that our participants across our Alzheimer’s disease programs will have questions as to what this news means for them. We are developing materials to share with research staff and update our participants with news they need to know about this development,” Carlsson said. “I can tell you what it means to me is, if I was eligible, I would enroll in the AHEAD prevention study.”

Learn more about the AHEAD study 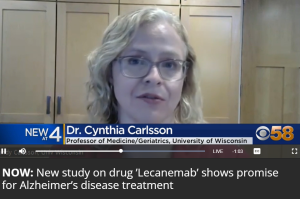 Carlsson spoke to multiple Wisconsin media outlets about the news. Read and watch these stories in the links below: