Cynthia Carlsson, MD, MS, was recently interviewed by CBS 58 News in Milwaukee about the U.S. Food and Drug Administration (FDA) 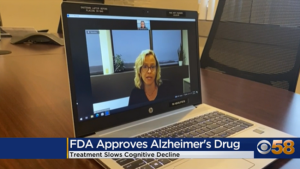 approval of Leqembi (lecanemab), which showed a reduction of clinical decline in a study of people with early Alzheimer’s disease.

UW–Madison is one of 100 research sites in the world currently offering a clinical study of the investigational treatment in people who may be at risk for memory problems. The AHEAD study is aimed at delaying memory decline in people up to 20 years before the symptoms of Alzheimer’s disease appear.